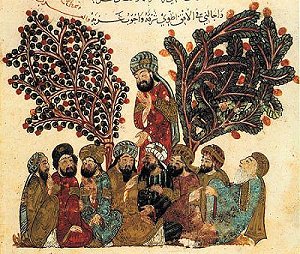 The Baghdad School, also known as the Arab school, was a relatively short-lived yet influential school of Islamic art developed during the late 12th century in the capital Baghdad of the ruling Abbasid Caliphate.

The movement had largely died out by the early 14th century, five decades following the invasion of the Mongols in 1258 and the downfall of the Abbasids’ rule, and would eventually be replaced by stylistic movements from the Mongol tradition. The Baghdad School is particularly noted for its distinctive approach to manuscript illustration.

The faces depicted in illustrations were individualized and expressive, with the scenes often highlighting realistic features of everyday life from the period. This stylistic movement used strong, bright colors, and employed a balanced sense of design and a decorative quality, with illustrations often lacking traditional frames and appearing between lines of text on manuscript pages.