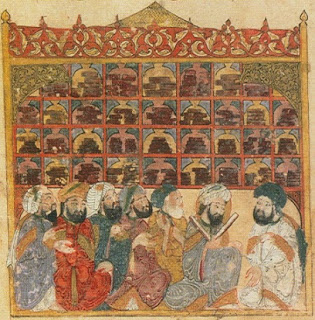 The House of Wisdom (Arabic: بيت الحكمة‎; Bayt al-Hikma) was a major intellectual center during the Islamic Golden Age. The House of Wisdom was founded by Caliph Harun al-Rashid (reigned 786–809) and culminated under his son al-Ma’mun (reigned 813–833) who is credited with its formal institution.

Al-Ma’mun is also credited with bringing many well-known scholars to share information, ideas, and culture in the House of Wisdom. Based in Baghdad from the 9th to 13th centuries, many learned scholars including those of Jewish or Christian background were part of this research and educational institute. Besides translating books into Arabic and preserving them, scholars associated with the House of Wisdom also made many remarkable original contributions to diverse fields.

During the reign of al-Ma’mun, astronomical observatories were set up, and the House was an unrivaled center for the study of humanities and for science in medieval Islam, including mathematics, astronomy, medicine, alchemy and chemistry, zoology, and geography and cartography. Drawing on Greek, Indian and Persian texts, the scholars accumulated a great collection of world knowledge, and built on it through their own discoveries. By the middle of the ninth century, the House of Wisdom was the largest repository of books in the world.

It was destroyed in the sack of the city following the Mongol Siege of Baghdad (1258).

The preservation and development of human knowledge was a cherished tradition of the Eastern Muslim and Persian Zoroastrians.[4] During the 4th through the 7th centuries, scholarly work in the Greek and Syriac languages was either newly initiated, or carried on from the Hellenistic period. Centers of learning and of transmission of classical wisdom included colleges such as the School of Nisibis and later the School of Edessa, and the renowned hospital and medical academy of Jundishapur; libraries included the Library of Alexandria and the Imperial Library of Constantinople; and other centers of translation and learning functioned at Merv, Salonika, Nishapur and Ctesiphon situated just south of what was later to become Baghdad.